Looking for some adventure in Los Feliz? Try finding all of the hidden staircases in Los Angeles, starting with the Berendo Stairs that lead to the Griffith Observatory. Spending a day on a walk looking for a hidden staircase is a great opportunity to get some exercise and mix up your daily routine. 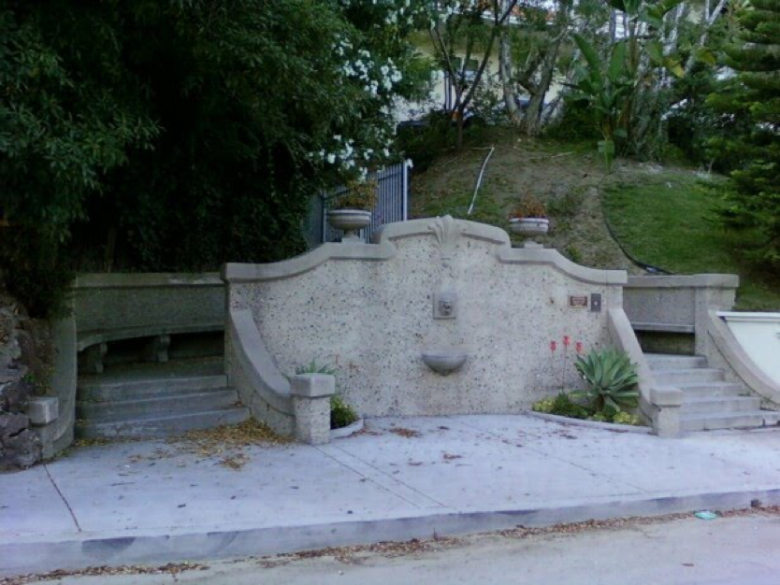 Los Feliz is a neighborhood in Los Angeles that covers approximately two and half square miles. It is bordered by the Santa Monica Mountains and Hollywood. It was originally Rancho Los Feliz, and it eventually became the birthplace of Mickey Mouse when Walt Disney drew the famous character in his uncle’s garage. Los Feliz is also the home to Disney’s first animation studio and many celebrities who live there. You can view two of Frank Lloyd Wright’s original designs in Los Feliz: the Ennis House and the Hollyhock House.

The entrance to the Berendo Stairs (created in 1924) is located at Berendo Street and Cromwell Avenue. The stairs are recognized by the city as having historical status. There is a resting stop at the midpoint of the stairs (there are 181 steps in total) where there are two benches to sit on. This is a beautiful and romantic spot in the summer, covered by bougainvillea flowers. 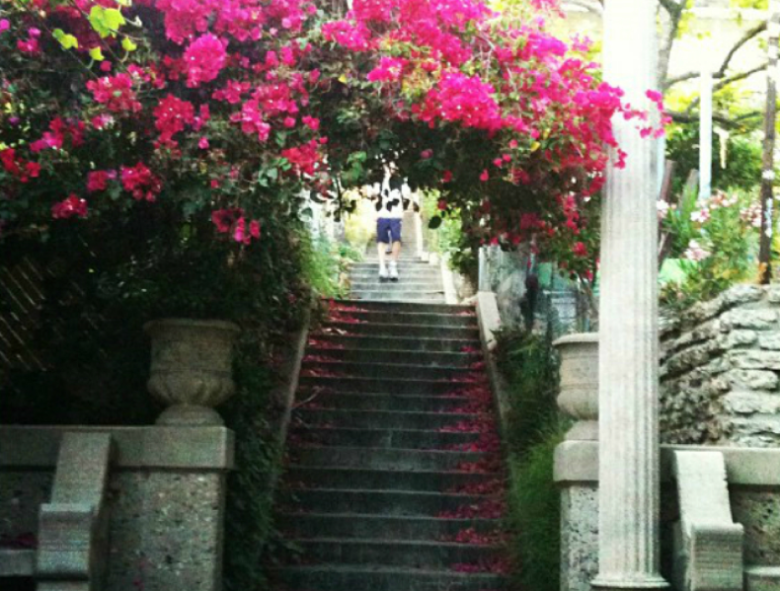 The Griffith Observatory, which opened in 1935 and was renovated in 2002, is named after Colonel Griffith J. Griffith. It covers about 3,000 acres of land and features an art deco interior and educational displays on astronomy. Admission to the observatory is free. You can also view the Ennis House from here, which was built in 1924 and was featured in the film Blade Runner.

If you haven’t done so already, spend some visiting Griffith Park. It covers about 4,000 acres, and it has a lot to offer for those with different activities and interests in mind. People go to the park to play tennis, hike the trails, use the equestrian trails, have picnics, ride the train, and go golfing. You can also see the Hollywood Sign from the park, visit the Los Angeles Zoo, and see the Autry National Center. The park is open between 5:00 pm and 10:30 pm.

Here are some other “secret” staircases to put on your list as you explore L.A.:

-Beachwood Canyon Stairs (This one is 800 steps!)

Have fun exploring the stairs in Los Angeles!

Are you interested in learning more about neighborhoods in Los Angeles and what they have to offer? At Real Estate Unlimited, it is our goal to share our expertise on the historic neighborhoods in Los Angeles, including the diverse landmarks, and the surrounding businesses, shopping, and dining to take advantage of. Call us today for a consultation! 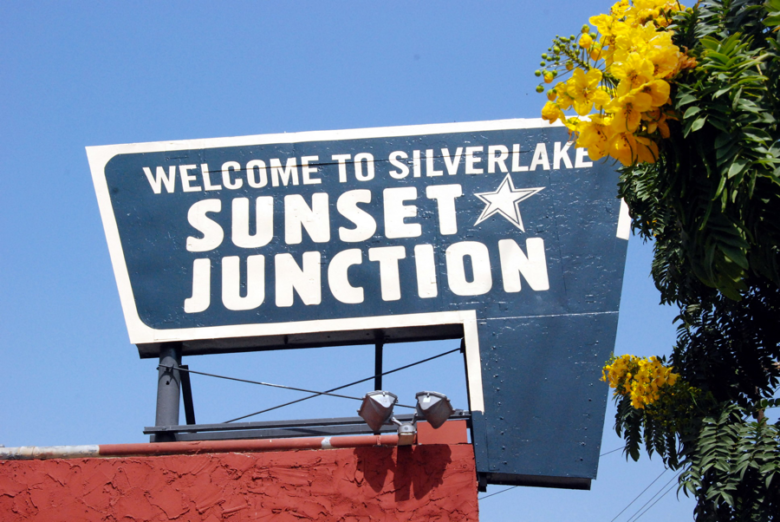 Sunset Junction was once known as Hollywood Junction. In 1895, the Pasadena and Pacific Railway Company built an interurban rail line from downtown Los Angeles to Santa Monica, whose route ran along Sunset Boulevard to Sanborn Avenue, where it swerved west along the current alignment of Santa Monica Boulevard.

In 1905, the Los Angeles and Pacific Railway, successor to the Pasadena and Pacific, built a new branch northwest along Sunset Boulevard from Sanborn Avenue as a shortcut to its already-built train line on Hollywood Boulevard, creating the junction that can still be clearly seen in the existing street layout. Rail service ceased on both lines in the nineteen fifties, but the graceful bend of the intersection still gives Sunset Junction a hint of early 20th-century elegance.

Click here to read about famous midcentury homes in Silverlake!

Sunset Junction was also the site of the Black Cat Tavern, a historic gay and lesbian bar that was the site of one of the first protests by gay and lesbian activists, predating the 1969 Stonewall protest for two years. A Different Light Bookstore, a gay and lesbian bookstore and community space that eventually became a national chain with branches in New York City and San Francisco, was founded at 4014 Santa Monica Boulevard in 1979. The store functioned as a salon for the community, hosting readings by luminaries like memoirist Christopher Isherwood, beat poet Allen Ginsberg, surrealist novelist William S. Burroughs, and activist Larry Kramer.

Although the Sunset Junction Street Fair has shut down, revitalization is currently underway in Sunset Junction, with design firm All That Is Solid planning to create a giant iron saddle sculpture to serve as the center of a newly envisioned landscaped plaza at the intersection. Although the new sculpture was stalled for a few years, it is hoped like the public installation, named “BLOOMRS,” will be going up soon. Right now, Sunset Junction’s signal landmark is a large royal-blue signpost that towers above the intersection. 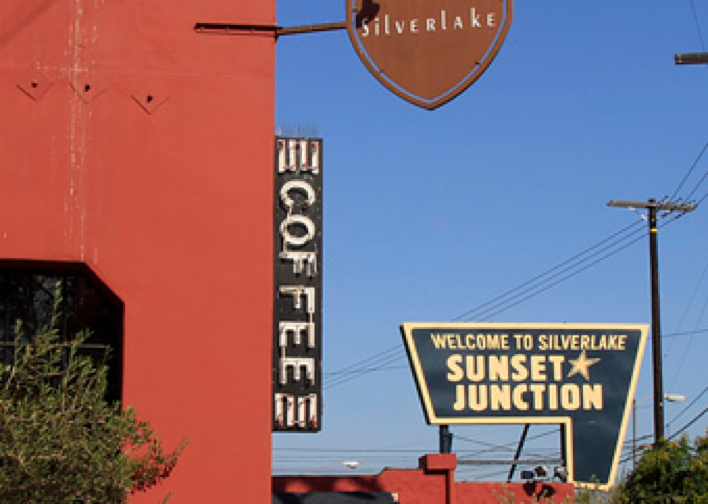 Due to recent urban renewal, as well as spiking interest in the Silver Lake neighborhood, Sunset Junction is currently attracting attention for its eclectic mix of hip coffee shops, casual-dining restaurants and vintage boutiques. The focal point of this micro-district is a rambling, rust-colored stucco building from the 1920s, host to a growing cohort of community businesses. Intelligentsia Coffee, a Chicago transplant known for the intensity of its dark-roast drip coffee and the graceful arabesques traced into the foam atop its cappuccinos, is a favorite for locals in search of a steamy caffeine fix.

Café Stella, a bustling French bistro, serves up golden-brown pommes frites, peppery coq au vin and succulent mussels. The Cheese Store of Silverlake, easily the best charcuterie and fromagerie in the city, is a standout delicatessen in the best Parisian style.  The Town and Café Bakery serves a menu of fresh rolls and pastries along with more substantial brunch fare like salmon cakes and omelettes. Pazzo Gelato serves up soft Italian ice cream, including crunchy pistachio and crimson raspberry sorbetto and more contemporary flavors like thai tea and salted caramel.

Click here to read about more dining options in nearby Echo Park.

Fashionistas and trendsetters will find plenty of tantalizing clothing and accessories at Sunset Junction. Upcycle headquarters Dean converts leather motorcycle jackets and members only windbreakers into stylish handbags and watchbands. Matrushka Construction combines clothing boutique with open studio, as owner-designer Laura Howe constructs elegant one-of-a-kind clothing onsite.  After dark, clubgoers line up outside the 4100 Bar, where you can sample cocktails in a luxurious, warmly-lit interior modeled after a Moroccan souk.

Los Angeles is legendary for its culture of constant reinvention, and Sunset Junction’s emerging market and nightlife scene is a sterling example. If you’re visiting Silver Lake, why not stop by the intersection of Sunset and Santa Monica to sample a coffee, try on a one-of-a-kind jacket, or take in the sunshine and local color?

At Real Estate Unlimited, we combine real-estate expertise with first-hand local knowledge, ensuring that every client is steered towards the perfect home in the perfect area. Silver Lake is just one of the historic Los Angeles neighborhoods where we show properties – call us for current property listings today!

The Satellite and the Silverlake Lounge

Silver Lake is no slouch when it comes to nightlife – this Los Angeles neighborhood has a thriving live performance and dance scene.  In this post, we’ll give you the rundown on two Silver Lake establishments, the Satellite and the Silverlake Lounge, both famous for their live performances calendar. 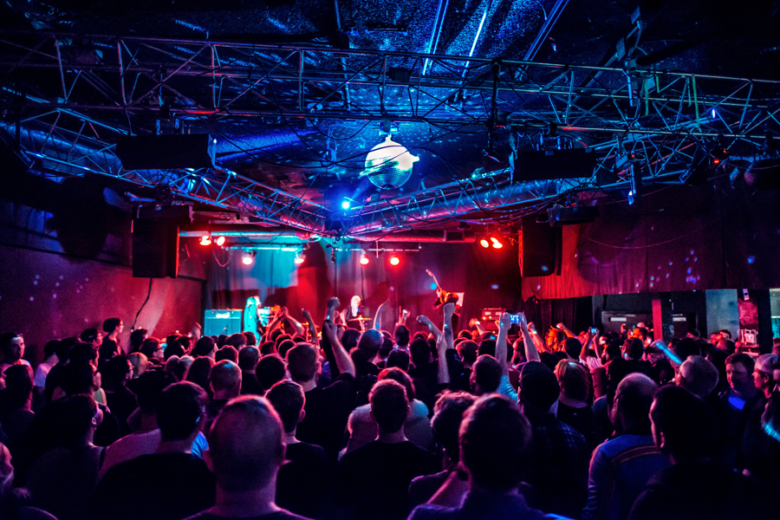 Formerly known as Spaceland, this club has a long tradition of live indie-rock music – everyone from the White Stripes to Rilo Kiley to the New York Dolls to the Gossip has played at this outstanding venue.

Their expertly curated schedule includes local bands and visitors from out of state, and the audience can count on an eclectic yet consistently catchy mix. Even though they’ve had plenty of attention from national and international stars – their performing lineup includes the Buzzcocks, Death Cab for Cutie, Of Montreal, Pavement, Moe Tucker, Supergrass, the Muffs, the Detroit Cobras, and Love with Arthur Lee – but they’ve also launched the careers of Los Angeles icons like Beck, Elliott Smith, Possum Dixon, and Silversun Smith.

Click here to read our take on the best eateries in Highland Park!

If you’re not an indie-rock aficionado, you can still enjoy their DJ and live comedy nights, as well as their pool table, which is kept secluded from the buzz of the main stage with the Satellite’s “Cone of Silence.” Their happy hour specials are always a bargain, so the Satellite has a loyal crowd of local regulars who stop in to drink and dance. 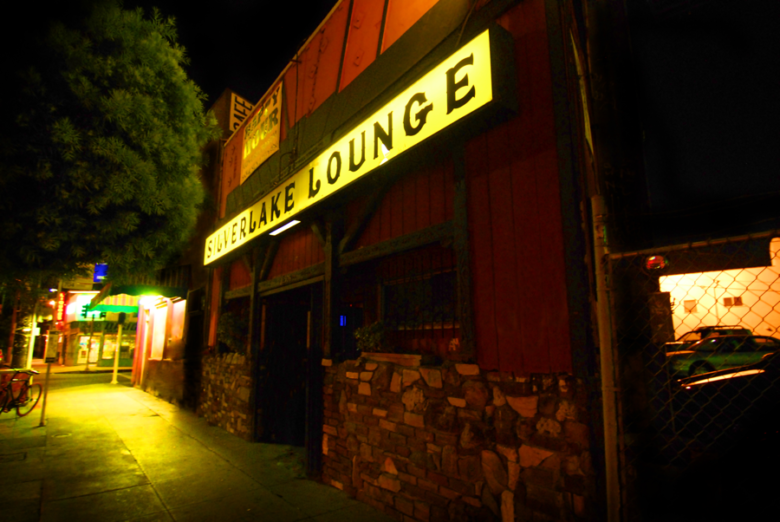 This cozy bar is small on space but big on atmosphere – and attitude! The Silverlake Lounge hosts drag shows with a Latin flair on Friday and Saturday nights, so come prepared to enjoy the show!

Live music has been part of the Silverlake Lounge’s entertainment wheelhouse since the very beginning, and the intimate space provides a perfect setting to enjoy performers like Portland-native Ezza Rose, “pop-proletariat” band Decker, and latter-day folk-music hero Rufus Wainwright.

Mondays and Fridays are also open-mic night, if you’re interested in seeing some breakout local musicians and comedians.  Sunday afternoons at 4:30 you can catch spoken word performances at the Wasted Afternoon open-mic matinee event. The crowd at these events tends to be raucous but respectful, with many performers attending with a group of applauding friends.  If you’ve got the talent and the chutzpah, you may even want to put your own name on the list!

At this biweekly event, local classical and jazz musicians perform a selection of their favorite repertoire pieces. Offerings range from contemporary jazz to baroque concertos to soaring arias – and several recurring performers specialize in international music, like classical guitar pieces from Mexico or German lieder. There’s no charge for these performances, but the Silverlake Lounge does collect tips and donations, and all contributions go straight to the musicians.

The Silverlake Lounge has a small cover charge, and is cash-only, but drinks are cheap enough to make up for the minor inconvenience. There’s an ATM right next to the bar if you’re low on folding money. Bartenders have a reputation for being friendly, and the casual vibe makes this place a warm, homey retreat for visitors looking to sample uncommon music in a unique setting.

Click here to check out our Echo Park dining guide!

Whatever your taste in music – indie-rock, jazz, classical, contemporary, lip-sync – the Silverlake Lounge and the Satellite have made a mission of providing a diverse menu of emerging and internationally-recognized names. If you’re in the neighborhood, come for the half-price cocktails and $4 pints, and stay for the amazing array of musical talent on offer!

Are you interested in hearing more about the Satellite, the Silverlake Lounge, and other Silver Lake bars and nightclubs?  At Real Estate Unlimited, our team of dedicated real estate agents takes pride in our in-depth local knowledge of the Los Angeles area, and we’d be happy to show you around this historic neighborhood. Call us for a consultation today!